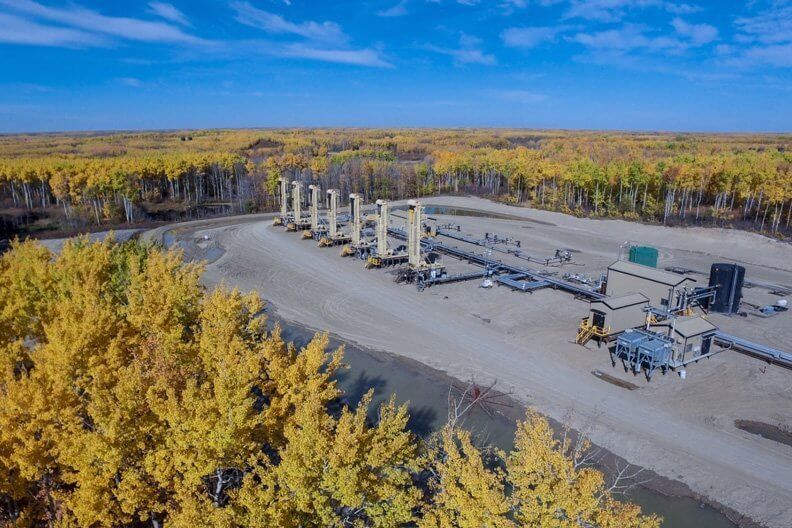 International Petroleum Corp. (“IPC”) (TSX, Nasdaq Stockholm: IPCO) and BlackPearl Resources Inc. (“BlackPearl”) (TSX: PXX, Nasdaq Stockholm: PXXS) are pleased to announce that they have entered into an agreement under which IPC will acquire all of the shares of BlackPearl based upon a share exchange ratio of 0.22 shares of IPC for each BlackPearl share (the “Transaction”). Based upon a volume weighted average price (VWAP) of the IPC Shares for the last thirty days, this represents an acquisition price of CAD 1.85 per BlackPearl share representing a premium of 42% to the closing price of the BlackPearl Shares on October 9, 2018 or a premium of 49% to the VWAP of the BlackPearl Shares for the last thirty days. The acquisition remains subject to shareholder approvals of both IPC and BlackPearl and certain regulatory approvals, with completion expected in December 2018.

Mike Nicholson, Chief Executive Officer of IPC comments: “With the completion of this transformational acquisition, IPC will more than double its total 2P reserves, with an increased oil weighting up from 42% to 74%. Total 2P reserves and contingent resources of IPC increase close to six times. IPC’s 2P reserves life is increased by seven years and daily average net production is expected to increase by more than 50% in the years ahead compared to IPC today. We also welcome the addition of a high calibre team of BlackPearl management and operational professionals with a long track record of value creation, to complement the existing IPC team.”

John Festival, Chief Executive Officer of BlackPearl comments: “This transaction will be very beneficial to the BlackPearl shareholders, who will gain an immediate material increase in value from the offered premium as well as exposure to the free cash flow of IPC’s diversified asset base while retaining the upside exposure to BlackPearl’s quality resource base. The combined company will have the financial strength to potentially accelerate development of BlackPearl’s exciting growth projects. I am very pleased to be joining the Board of Directors of IPC and look forward to adding strategic input to IPC going forward.”

Lukas H. Lundin, Chairman of IPC comments: “I am very excited about the future of IPC as the leading oil and gas growth company in the Lundin Group. IPC’s strategy is to maximize the value of the current asset base and, at the same time, seek to use its financial strength to acquire strategic oil and gas assets. This is exactly the right time in the resource cycle to be pursuing this strategy. The acquisition by IPC of BlackPearl takes the resource base above 1 billion barrels and is another big step in delivering that strategy. The Lundin family is fully committed to remain as a major shareholder of IPC into the future.”

Notes:
(1) Based on the closing price of the IPC Shares of October 9, 2018, converted to USD at current exchange rates.

The board of directors of IPC (the “IPC Board”) and the board of directors of BlackPearl (the “BlackPearl Board”) have unanimously approved the Transaction, following the recommendations made by special committees of independent directors of the respective Boards. The Transaction is subject to approval by the shareholders of both companies, the Court of Queen’s Bench of Alberta, stock exchange approvals and approvals by certain regulatory and other authorities (including that a prospectus in Sweden prepared by IPC is approved and registered by the Swedish Financial Supervisory Authority (the “SFSA”)), and is subject to the satisfaction or waiver of other customary closing conditions. The Transaction is anticipated to close in December 2018.

Strategic Rationale
The Transaction is consistent with IPC management’s strategy for IPC to be a leading independent oil and gas company focused on production of high quality assets in stable jurisdictions around the world and generating long term value for all its stakeholders.

Stable Long-Term Production: IPC will have forecast average combined production of approximately 45,250 boepd for 2018, based on the mid-point guidance of IPC and BlackPearl, across a diverse set of oil and gas assets in Canada (Alberta and Saskatchewan), Malaysia, France and The Netherlands. Production will be comprised of approximately 61% liquids (21% light oil and condensate, 40% heavy oil) and 39% natural gas. By geography, production will be weighted approximately 78% from Canada, 15% from Malaysia and 7% from France and The Netherlands.

Organic Growth Opportunities: IPC will have a deep inventory of high quality drilling prospects and identified future development projects, with the potential to generate positive returns and deliver organic production and reserves growth.

Strong Balance Sheet: IPC will have strong financial liquidity from the cash flows generated by its operations throughout the world, as well as continued access to unutilized amounts under credit facilities to accelerate investment in the combined company’s growth projects.

Ability to Optimize Capital Allocation: IPC will have a diverse portfolio of assets in Canada, Malaysia and Europe, allowing it to high grade investment opportunities from the enlarged portfolio and achieve attractive returns for shareholders.

Strong Management and Board: IPC plans to continue with its existing Board and management, complemented by the addition of BlackPearl management representatives both at the IPC Board level and in local and senior management. The two combined organizations have substantial local knowledge and operating capabilities.

Increased Scale and Expanded Investor Base: IPC is expected to have a market capitalization of approximately USD 1 billion on closing of the Transaction, allowing IPC to access a greater universe of institutional and retail investors on both the Toronto Stock Exchange and the Nasdaq Stockholm. IPC’s current dual stock exchange listing and its significant access to a European investor base, combined with BlackPearl’s North American investors, could benefit all shareholders in the combined IPC going forward in terms of improved liquidity and market attention.

IPC and BlackPearl Asset Summary
IPC will acquire the Canadian asset base of BlackPearl to combine with IPC’s existing Canadian and international assets. These assets include the following:

The first 6,000 boepd phase of the Onion Lake thermal project commenced commercial production in 2015. The second 6,000 boepd phase commenced steam injection during the first quarter of 2018 and reached name-plate capacity of 12,000 boepd in late September. Total cost of the expansion was CAD 175 million, which is just under CAD 30,000 per flowing barrel, a top tier industry metric. During the second quarter of 2018, BlackPearl also started construction of the first sustaining well pad and related facilities for the first phase which is expected to be completed by the end of the year.

During the third quarter of 2018, BlackPearl began work on a facility optimization program of the first phase steam facilities. This optimization work is expected to allow an increase in thermal production by up to an additional 2,000 boepd and is expected to cost approximately CAD 15 million, representing an industry leading development capital of CAD 7,500 per flowing barrel. This program is expected to be completed in the first half of 2019 and BlackPearl anticipates it will take approximately nine to twelve months after completion to reach the increased production target.

The Suffield Area oil and gas assets are held over a large, contiguous land position of 800,000 net acres of shallow natural gas rights and 100,000 net acres of oil rights in southeast Alberta. These producing fields have future development potential from a combination of low risk development drilling, well stimulation and enhanced oil recovery (EOR) opportunities, which had not been undertaken for a number of years due to the previous owner’s capital allocation priorities.

IPC’s production and reserves in Malaysia come from the Bertam oil field located offshore Peninsular Malaysia. The Bertam field has been on production since April 2015. IPC is the operator of Block PM307 with a 75% working interest, with Petronas Carigali Sdn Bhd holding the remaining 25%. Production from IPC’s oil and gas assets in Malaysia is light, high quality oil. A number of future infill drilling locations and near field exploration targets have been identified.

IPC’s oil and gas assets in France are comprised of two main operating basins, the Paris Basin, which is operated by IPC, and the Aquitaine Basin, which is operated by Vermilion Energy. Both basins are characterized by a high number of wells with low production decline rates. Production from IPC’s oil and gas assets in in France is light, high quality oil. IPC is maturing the development of its two biggest fields in the Paris Basin: the Vert La Gravelle field as well as the western flank of the Villeperdue field.

BlackPearl has received regulatory approval for an 80,000 boepd SAGD (steam-assisted-gravity-drainage) oil sands project at Blackrod. The delineated resource contains over 600 million boe of best estimate contingent resource which represents over a 20 year reserve life index at 80,000 boepd. For the last 5 years, BlackPearl has operated a successful SAGD pilot at Blackrod which has validated both commercial production rates and a corresponding steam oil ratio.

All of the directors and officers of BlackPearl, as well as entities related to the Lundin family and Burgundy Asset Management Ltd., together representing approximately 40% of the total BlackPearl Shares, have entered into agreements with IPC pursuant to which they have agreed to vote their BlackPearl Shares in favour of the Transaction.

Based on the unanimous recommendation from a special committee comprised of independent directors of IPC (the “IPC Special Committee”), the IPC Board has unanimously approved the Transaction, determined that the Transaction is in the best interests of IPC, and has recommended that the holders of IPC Shares vote in favour of the issuance of IPC Shares pursuant to the Transaction. Paradigm Capital Inc. (“Paradigm Capital”) has provided the IPC Special Committee with its written opinion that the exchange ratio pursuant to the Arrangement Agreement is fair, from a financial point of view, to IPC and to the holders of IPC Shares.

All of the directors and officers of IPC as well as an entity related to the Lundin family, together representing approximately 34% of the total IPC Shares, have entered into agreements with BlackPearl pursuant to which they have agreed to vote their IPC Shares in favour of the issuance of IPC Shares in connection with the Transaction.

A presentation related to the Transaction will be available in connection with the conference call on IPC’s website at www.international-petroleum.com and BlackPearl’s website at www.blackpearlresources.ca.