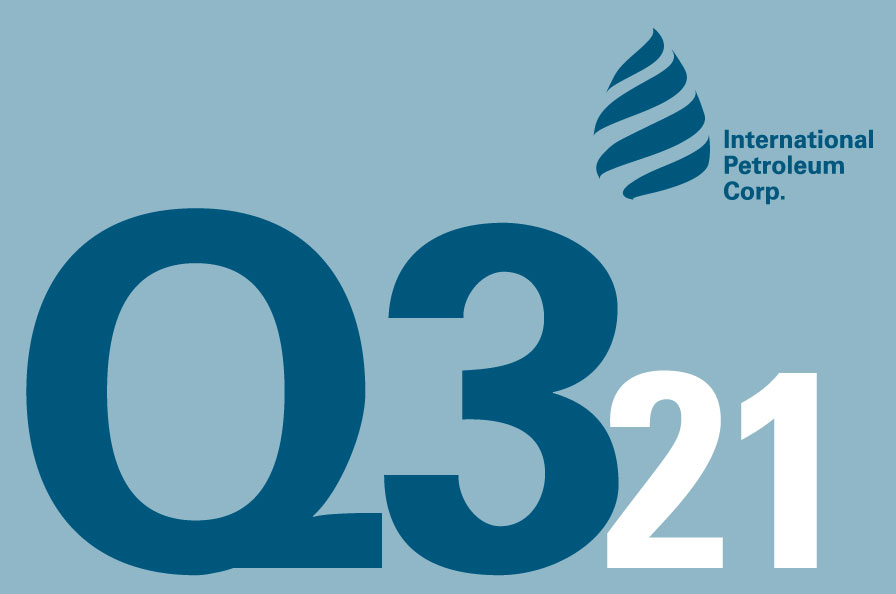 International Petroleum Corporation (IPC or the Corporation) (TSX, Nasdaq Stockholm: IPCO) today released its financial and operating results and related management’s discussion and analysis (MD&A) for the three and nine months ended September 30, 2021. In addition, IPC is pleased to announce that it has sought approval from the Toronto Stock Exchange (TSX) to commence a normal course issuer bid to repurchase its own common shares through the facilities of the TSX and Nasdaq Stockholm.

Proactive supply management by the OPEC+ group, led by Saudi Arabia, is rebalancing the market. The International Energy Agency (IEA) is forecasting a net supply deficit during the fourth quarter of 2021 and excess oil inventory levels are reported to have drawn back down below pre-pandemic levels.

The recovery in oil demand remains on track as we see the easing of restrictions on mobility following the successful roll-out of Covid-19 vaccination programs to the wider population. With demand still not expected to fully recover to pre Covid-19 levels until next year, tapering of the supply curtailments by OPEC+ members looks set to continue into 2022.

In Canada, third quarter 2021 Western Canadian Select (WCS) crude price differentials averaged below USD 14 per barrel and forward markets into 2022 and 2023 are pricing the WCS differential at around USD 15 per barrel. Completion and placement into service of Enbridge’s Line 3 replacement pipeline as well as the positive construction progress on the TransMountain pipeline expansion project is providing a much more constructive outlook for Canadian oil market egress relative to the tightness we have witnessed over the past several years. IPC has positioned itself well to benefit from this fundamental improvement in market conditions.

Gas markets have surged to new highs driven by a combination of increasing demand, lower supply and warmer than average temperatures that has diverted gas supply away from injecting into storage. Third quarter average Empress prices were above CAD 4.00 per Mcf and the winter strip pricing is above CAD 5.00 per Mcf. We could witness further tightness during the winter period if cold temperatures prevail.

IPC benefits from a well balanced mix of production comprising approximately 49% Canadian Crude, 36% Canadian Natural Gas and 15% Brent weighted oil.
With synchronized strength in pricing across the entire energy complex, combined with delivering operational excellence above the high end of our forecasts, IPC has been able to deliver our best ever quarterly financial performance since our launch in 2017 and has approved our third share repurchase program.
In addition we continue to remain opportunistic in our approach with respect to further M&A activity.

Third Quarter 2021 Highlights
During the third quarter of 2021, our assets delivered average net production of 46,800 boepd. Production for the first nine months of 2021 averaged 45,100 boepd.

This is our third quarter in succession of delivering production above our original high end guidance. It was made possible by the very high uptime performance across all our assets as well as the earlier than forecast production contribution from the newly commissioned Pad D’ at Onion Lake Thermal.

In our second quarter report, we increased our full year average net daily production guidance to above 44,000 boepd, with a forecast 2021 exit rate in excess of 45,000 boepd.

We now expect our full year average net daily production to be above 45,000 boepd, with an increased forecast 2021 exit rate in excess of 46,000 boepd.

Our operating costs per boe for the third quarter of 2021 was USD 14.7, slightly better than our latest guidance. No changes are made to our full year guidance of USD 15.5 per boe.

Capital and decommissioning expenditures during the first nine months of 2021 was USD 30 million. Our full year 2021 guidance is reduced to USD 50 million from our second quarter guidance of USD 73 million. The reduction is largely the result of rephrasing Malaysian drilling expenditures into the first quarter of 2022.

Free cash flow generation was exceptionally strong at USD 77 million during the third quarter of 2021 and USD 176 million for the first nine months of 2021, a record high. This represents close to 22% of IPC’s current market capitalization.

A recent research report by RBC Capital Markets analyzing Global Integrated and E&P companies showed average 2021 free cash flow yields by each sub group to range between 8% and 16% with a global average of 12%. It is clear that IPC offers an attractive proposition for investors with a yield that is more than double that of our fellow industry peers.

Net debt has reduced by half during the first nine months to USD 161 million. Net debt to EBITDA drops to 0.6 times from 3 times at the year-end 2020 (trailing 12 months), and deleveraging is continuing.

Share Repurchase Program
IPC is pleased to announce today that we have sought approval from the TSX to commence a normal course issuer bid (NCIB) to repurchase IPC’s common shares through the facilities of the TSX and Nasdaq Stockholm. This will be IPC’s third share repurchase program since listing in 2017. The Board of Directors has approved, subject to acceptance by the TSX, the repurchase of up to approximately 10.8 million common shares, representing approximately 7% of IPC’s outstanding common shares (or 10% of IPC’s “public float” as at November 2, 2021), over a period of twelve months. IPC currently does not hold any common shares in treasury.

Environmental, Social and Governance (“ESG“) Performance
Health, Safety & Environmental performance remains a priority for all operational assets. Our objective is to reduce risk and eliminate hazards to prevent the occurrence of accidents, ill health and environmental damage, as these are essential to the success of our operations. During the third quarter of 2021, IPC recorded no material safety or environmental incidents.

In response to the Covid-19 pandemic, we remain focused on protecting the health and safety of our employees, contractors and other stakeholders, while also working to ensure business continuity. In the third quarter of 2021, IPC continued the health protocols implemented throughout the organization.”