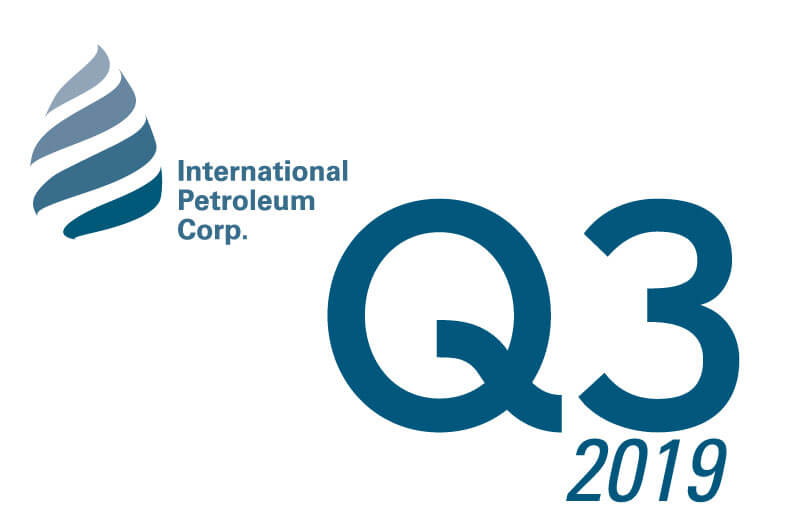 International Petroleum Corporation (IPC or the Corporation) (TSX, Nasdaq Stockholm: IPCO) today released its financial and operating results and related management’s discussion and analysis (MD&A) for the three and nine months ended September 30, 2019. In addition, IPC is pleased to announce that it has sought approval from the Toronto Stock Exchange (the “TSX”) to commence a normal course issuer bid to repurchase its own common shares through the facilities of the TSX and Nasdaq Stockholm.

• IPC intends to launch a new share repurchase program, the second since our April 2017 spin-off, with the intention to repurchase up to approximately seven percent or 11.5 million IPC shares, the maximum permitted over a twelve month period under Canadian and Swedish securities law. Implementation of the share repurchase program remains subject to Toronto Stock Exchange (TSX) approval.
• Average net production of 45,500 barrels of oil equivalent (boe) per day (boepd) for Q3 2019 in line with guidance.
• First ever horizontal well on the Vert La Gravelle field in France successfully completed in September 2019.
• Commenced the three well infill drilling program in Malaysia.
• Onion Lake Thermal F-Pad wells in Canada came on stream in September 2019.
• On track for 50,000 boepd 2019 exit rate with ongoing drilling activities in Canada, France and Malaysia.
• Operating costs per boe of USD 13.0 for Q3 2019, in line with guidance.
• Capital expenditure budget remains in line with guidance of USD 188 million.
• Strong operating cash flow generation of USD 70 million in Q3 2019 (USD 229 million for the first nine months of 2019) at the upper end of guidance.
• Operating cash flows were utilised to fund capital expenditures and to reduce financial liabilities, with net debt decreasing from USD 277 million as at December 31, 2018 to USD 208 million as at September 30, 2019.

Mike Nicholson, IPC’s Chief Executive Officer, commented,
“We are pleased to announce another strong set of results for the first nine months of 2019.
During Q3 2019, our assets delivered average daily net production of 45,500 boepd, in line with our latest Q2 guidance. Full year average production guidance is unchanged, expected at the lower end of the 46,000 to 50,000 boepd guidance range. The 2019 exit production rate expectation remains at 50,000 boepd. Our operating costs per boe for Q3 2019 was USD 13.0, in line with guidance. Full year capital expenditure guidance remains unchanged at USD 188 million.

IPC has continued to deliver a robust financial performance during Q3 2019 generating a quarterly operating cash flow of USD 70 million, at the upper end of guidance. This allowed IPC to fund its expenditure program and to reduce net debt from USD 239 million at the end of Q2 2019 to USD 208 million by the end of Q3 2019.

In Malaysia, a world class uptime performance on the Bertam FPSO in excess of 99% continued during Q3 2019. Third quarter production on the Bertam field was in line with our Q2 guidance. The three well infill drilling program commenced in late August 2019.

In Canada, the N2N enhanced oil recovery project and drilling program in the Suffield area remain on schedule with the N2N plant ramp up ongoing and four out of a planned eight wells on production. The average production from the Onion Lake Thermal facility during Q3 2019 was in line with our Q2 guidance. Facility optimization work has been completed at Onion Lake Thermal that allowed for steam injection to commence at F-Pad during Q3 2019 and for the start-up of production from the F-Pad wells during September 2019.

In France, the first horizontal development well at the Vert La Gravelle field commenced production in mid-September 2019. This was IPC’s first horizontal well drilled into the Triassic reservoir in France. Initial indications of productivity from the well are ahead of expectation. We are currently drilling the second well in the Southern part of the Vert La Gravelle field.

With significant undrawn credit facilities at our disposal, we continue to opportunistically evaluate additional acquisition targets that we believe can deliver long-term value for our shareholders.

Share Repurchase Programme
We are today pleased to announce that we have sought approval from the TSX to commence a normal course issuer bid to repurchase IPC’s common shares through the facilities of the TSX and Nasdaq Stockholm. The Board of Directors has approved, subject to acceptance by the TSX, the repurchase of up to approximately 11.5 million common shares, representing approximately 7% of IPC’s outstanding common shares (or 10% of IPC’s “public float” as at November 5, 2019), over a period of twelve months. IPC currently does not hold any common shares in treasury.