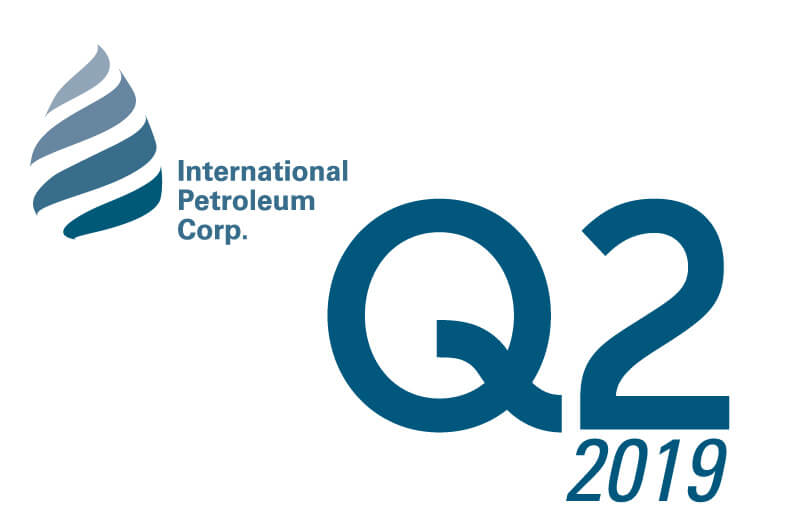 “We are pleased to announce another strong set of quarterly results, with a ramp up in activity levels across all of our areas of operations during the first half of 2019.

During Q2 2019, our assets delivered average daily net production of 46,100 boepd. Full year average production is expected to be towards the lower end of the 46,000 to 50,000 boepd guidance range as a result of the delayed ramp up at Onion Lake Thermal in Canada and the partial production curtailment experienced in France during Q2 2019. The curtailment in France was due to a temporary suspension of operations at a refinery, with normal operations resuming in late July 2019. The 2019 exit production rate expectation remains at 50,000 boepd. Our operating costs per boe for Q2 2019 was USD 12.6, slightly better than guidance.

IPC has continued to deliver a robust financial performance during Q2 2019 generating a quarterly operating cash flow of USD 76 million, at the upper end of guidance. This allowed IPC to fund its expenditure program and to reduce net debt from USD 257 million at the end of Q1 2019 to USD 239 million by the end of Q2 2019.

In Malaysia, following positive results from the 2016 and 2018 infill drilling programs and continued good reservoir performance, we approved a third phase of infill drilling on the Bertam field for execution in 2019. The drilling program commenced in June 2019. The drilling of two infill landing pilots has been completed. Better than expected results were encountered in the A-15 area and poorer than expected results were encountered in the A-14 area. As a result, the third infill well (A-20) is planned for the A-15 area. The Keruing exploration well was drilled in Q3 2019 and the well is being plugged and abandoned after the reservoir was found to be water-bearing. The drilling program in Malaysia continues with the drilling of three infill wells (A-18, A-19, A-20) and work progresses to identify potential new locations for drilling in 2020.

In Canada, we plan to drill 25 development oil wells in the Suffield area in 2019, including wells related to the Suffield N2N EOR development project. The drilling campaign commenced in Q4 2018 and production to date has been ahead of pre-drill expectations. On the gas side, the gas optimization program continues with the objective of minimizing natural declines through 2019.

In France, our team is focused on the execution of the Vert La Gravelle redevelopment project using horizontal drilling techniques. The rig is currently drilling the first of three wells as scheduled.

With significant undrawn credit facilities at our disposal, we continue to opportunistically evaluate additional acquisition targets that we believe can deliver long-term value for our shareholders.”