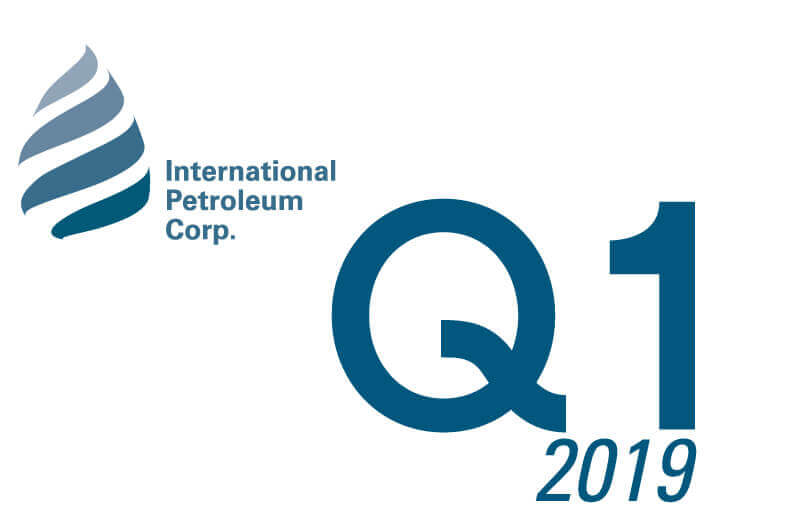 Financial and Operational Highlights
• Average net production of 44,400 barrels of oil equivalent (boe) per day (boepd) for Q1 2019.
• The impact of extreme weather on Canada gas production (9% below mid-point guidance) was more than offset by higher realized gas prices (31% above forecast). All other producing assets in line with mid-point guidance.
• Operating costs per boe of USD 13.2 for Q1 2019, in line with guidance.
• Canada Suffield area oil drilling program results in line with pre-drill expectations.
• Malaysia exploration and three well infill drilling program on track to commence in Q2 2019.
• France Vert La Gravelle redevelopment project on track to commence in Q2 2019.
• Completed acquisition of lands adjoining the Blackrod project in Canada, with best estimate contingent resources (unrisked) of 243 million boe (MMboe).
• Capital expenditure budget increased from USD 166 million to USD 188 million, including to fund the enhanced oil recovery (EOR) development project at the Suffield N2N oil field and further conventional oil drilling in the acquired BlackPearl assets in Alberta.
• Strong first quarter operating cash flow generation of USD 83 million at the upper end of guidance following the inclusion of the acquired BlackPearl assets and stronger than forecast realized crude oil and natural gas prices.
• Net debt reduced from USD 309 million as at March 31, 2018 to USD 257 million as at March 31, 2019, including net debt from the acquisition of BlackPearl.

Mike Nicholson, IPC’s Chief Executive Officer, commented,
“Our focus remains unchanged: seeking to deliver operational excellence, demonstrating financial resilience, maximizing the value of our resource base and targeting growth organically and through acquisition. With a strong set of first quarter results including for the first time the results of our BlackPearl acquisition completed in December 2018, as well as announcing an expanded organic growth program and a very low cost acquisition of material contingent resources, we continue to make excellent progress on all fronts in delivering on that strategy.

During Q1 2019, our assets delivered average daily net production of 44,400 boepd. All assets performed in line with our mid-point guidance with the exception of Suffield gas production in Canada. Abnormally cold temperatures experienced during the first quarter resulted in lower gas production. However, the lower production was more than offset by a higher realized gas price. Production guidance for the full year is retained at 46,000 to 50,000 boepd. Our operating costs per boe for Q1 2019 was USD 13.2, in line with guidance.

IPC has continued to deliver a robust financial performance during Q1 2019 generating a record high quarterly operating cash flow of USD 83 million, at the upper end of guidance. This allowed IPC to fund its expenditure program and reduce net debt from USD 277 million at the end of 2018 to USD 257 million by the end of the first quarter.

In Malaysia, following positive results from the 2016 and 2018 infill drilling programs and continued good reservoir performance, we approved a third phase of infill drilling on the Bertam field for execution in 2019. In addition, we plan to drill the Keruing prospect as part of the same 2019 campaign. We remain on track for the drilling program to commence in Q2 2019.

In Canada, we plan to drill seventeen development oil wells in the Suffield area in 2019, excluding wells related to the Suffield N2N EOR project. The drilling campaign commenced in the fourth quarter of 2018 and production has been in line with pre-drill expectations. Onion Lake facility optimization and ramp up is ongoing although the abnormally cold weather during the first quarter has led to a slightly slower ramp up than planned as we entered the second quarter. On the gas side, the gas optimization program continues with the objective of minimizing natural declines through 2019.

In France, our team is focused on the execution of the Vert La Gravelle redevelopment project using horizontal drilling techniques. The rig has been contracted and is expected to be on location this month to commence the drilling of three wells as scheduled.

In addition, we have successfully completed our reviews of the Suffield N2N EOR development project in Canada and plan to proceed with the drilling of eight development oil wells and the injection of Alkaline Surfactant Polymer (ASP) to improve sweep efficiency and recovery factors. We have also identified two potential new conventional oil plays on properties acquired as part of the BlackPearl transaction and we plan to drill five wells that in the success case, could identify up to 130 conventional oil drilling locations. As a result, we are increasing our capital budget by USD 22 million, from USD 166 million which was at the upper end of our guidance to USD 188 million. Following these changes to our capital expenditure budget, and given our very strong cash flow generation year to date, we still expect to fully fund the 2019 capital program from our operating cash flow.