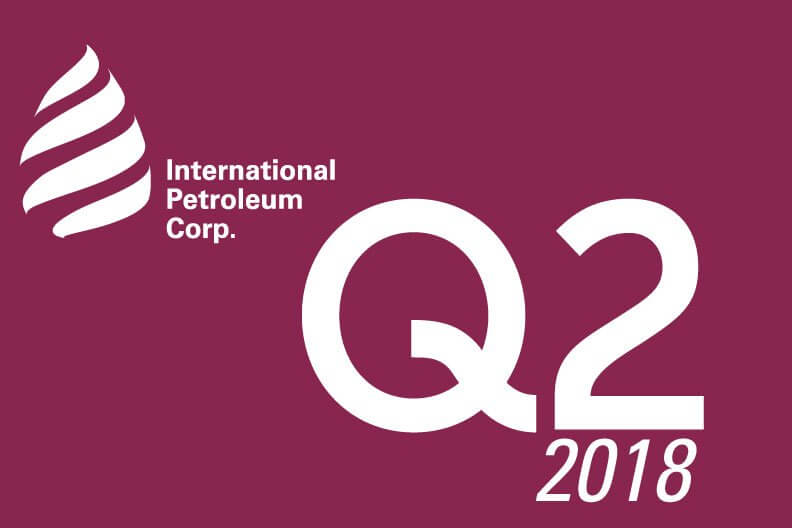 Financial and Operational Highlights
• Total average net production of 34,900 barrels of oil equivalent (boe) per day (boepd) for the second quarter of 2018.
• Production guidance range for the full year 2018 revised to 32,500 to 34,000 boepd.
• Operating costs per boe of USD 11.96 for the second quarter of 2018.
• Progressing plans to drill the Keruing prospect in Malaysia in late 2018.
• Preparing for oil drilling and continuing further gas optimization during 2018 in Canada.
• Full year 2018 capital expenditure guidance increased from USD 39.4 million to USD 44.0 million mainly related to increased gas optimization activities in Canada.
• IPC shares commenced trading on the Nasdaq Stockholm in June 2018.
• Net debt reduced by over USD 100 million since completion of the acquisition of the Suffield assets to USD 255 million as at June 30, 2018.
• Full repayment of the CAD 60 million second lien credit facility.

“We are very pleased to announce our second quarter results for 2018. During the second quarter, IPC passed our first anniversary as an independently listed company in Canada and Sweden. In June 2018, our shares commenced trading on the main Nasdaq Stockholm exchange.

Our strategic focus remains unchanged: seeking to deliver operational excellence, demonstrating financial resilience, maximizing the value of our resource base and targeting growth through acquisition.

During the second quarter of 2018, all of our assets continued to perform well with average net production of 34,900 boepd, six percent higher than our first quarter production. Given the strong first half performance, we are revising our full year 2018 average production guidance range from 30,000 to 34,000 boepd to 32,500 to 34,000 boepd, net to IPC.

Second quarter operating costs per boe were ahead of guidance at USD 11.96.

We delivered a robust financial performance during the second quarter of 2018 generating operating cash flow of USD 77 million. This allowed IPC to pay the CAD 12 million deferred payment for the acquisition of the Suffield assets in Canada, fund our capital expenditure program and reduce net debt from USD 309 million at the end of the first quarter to USD 255 million by the end of the second quarter. First half 2018 operating cash flow was in excess of USD 150 million and net debt reduction was in excess of USD 100 million since completion of the Suffield acquisition in early January 2018.

In Malaysia, following positive results from the previous infill drilling programs and continued good reservoir performance, we continue to assess potential further infill drilling on the Bertam field. In addition, we are progressing plans to drill the Keruing prospect in late 2018, subject to regulatory approval and rig contracting.

In Canada, we are preparing for the launch of the first oil drilling campaign in the Suffield assets since 2014, with six wells expected to be completed by the end of 2018. Work runs in parallel to mature additional oil drilling and water injection candidates to extend the program into 2019. In addition, the immediate focus for the Suffield assets is on gas optimization efforts to offset natural declines.

We are increasing our capital expenditure guidance for 2018 to USD 44.0 million from 39.4 million mainly related to increased gas optimization activities in Canada.