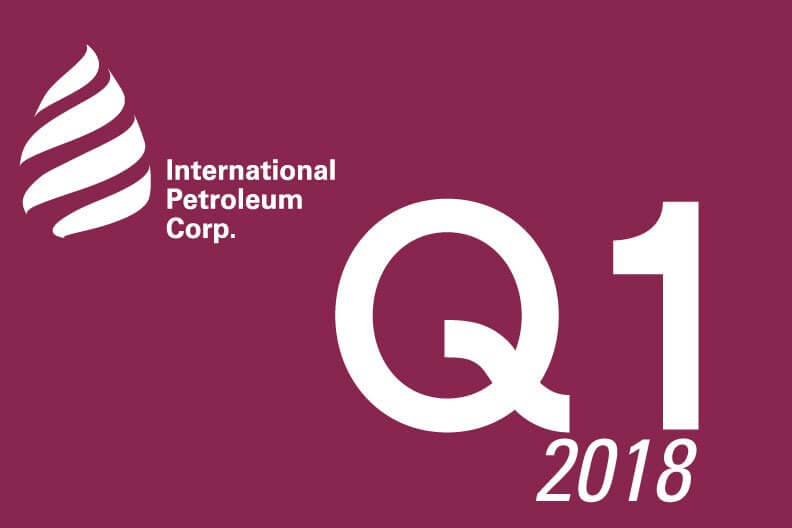 “We are very pleased to announce our first quarter results for 2018. We include for the first time the contribution from our new Canadian business, following the completion of the acquisition of the Suffield area conventional oil and gas assets on January 5, 2018.

On April 24, 2018, IPC passed our first anniversary as an independently listed company in Canada and Sweden. Our focus since launching remains unchanged: seeking to deliver operational excellence, demonstrating financial resilience, maximizing the value of our resource base and targeting growth through acquisition.

Our vision and strategy from the outset was to use the IPC platform to build a new international upstream company focused on creating long term value for our shareholders, launched at a favorable time in the industry cycle to acquire and grow a significant resource base. We have made excellent progress during 2017 and into early 2018 on all fronts in delivering on that strategy.

We delivered strong operational and financial performance during the first quarter 2018 with IPC’s assets generating significant operating cash flow of USD 76 million. This allowed IPC to reduce net debt from USD 355 million post-completion of the Canadian acquisition to USD 309 million by the end of the first quarter 2018.

We have also taken the decision to approve additional capital expenditure in Malaysia of USD 6.5 million (net) to drill the Keruing (formerly I35) prospect in late 2018, subject to regulatory approval and rig contracting. Best estimate gross unrisked prospective resources are estimated at 7.2 MMboe gross (5.4 MMboe net). The Keruing prospect is only two kilometres from the Bertam field facilities and would be a high value tie back candidate in the success case. Work also continues to mature the next phase of infill drilling for execution in 2019 with two to three potential drilling candidates identified.

In Canada, we are preparing for the launch of the first oil drilling campaign in the Suffield area assets since 2014, with six infill wells expected to be completed by the end of 2018. Work runs in parallel to mature additional oil drilling candidates to extend the program into 2019. On the gas side, the immediate focus is on gas optimization efforts to offset natural declines as opposed to new gas drilling and the team is evaluating a wide range of activities over and above those already approved in our 2018 budget that could see additional activity before the year end.