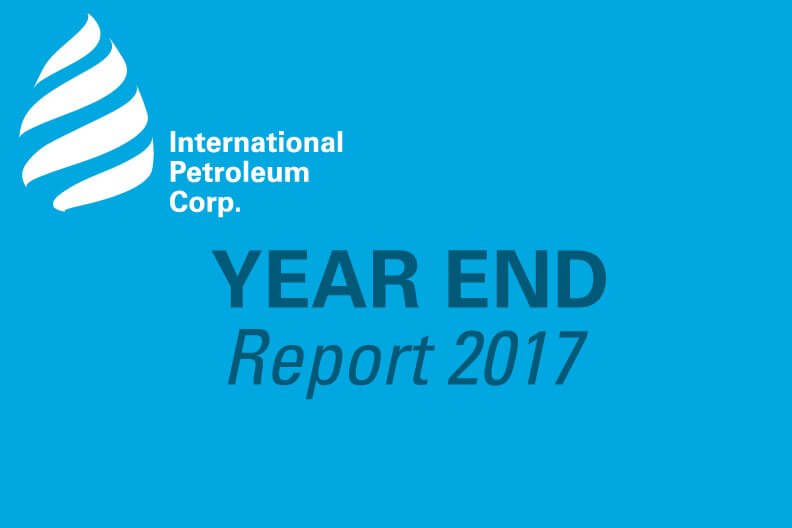 International Petroleum Corporation (IPC or the Corporation) (TSX, Nasdaq First North: IPCO) today released its financial and operating results and related management’s discussion and analysis (MD&A) for the three months and year ended December 31, 2017. (1) IPC is also pleased to announce its 2018 capital expenditure budget of USD 32 million and its 2018 production guidance of between 30,000 and 34,000 barrels of oil equivalent (boe) per day (boepd). Year-end reserves and contingent resources more than quadrupled and tripled respectively to 129.1 million boe (MMboe) and 63.4 MMboe, after giving effect to the Suffield acquisition in Canada. (2)

Mike Nicholson, IPC’s Chief Executive Officer, commented,
“We are very pleased to announce our year-end results for 2017. Since IPC’s listing in April 2017, we have made excellent progress on all of our strategic goals of delivering operational excellence, demonstrating financial resilience, maximizing the value of our resource base and targeting value-driven growth through acquisition.

Now we look ahead to 2018 and beyond as we continue implementing our strategies to build long-term shareholder value.

2017 Year-End Results
During the fourth quarter of 2017, all of our assets continued to perform well with production of 9,952 boepd and full-year 2017 production of 10,307 boepd, three percent ahead of mid-point guidance. Lower than forecast operating costs have allowed us to deliver full year operating costs of USD 16.1 per boe, 14 percent below our guidance.

We delivered a robust financial performance during 2017 with IPC’s assets generating significant operating cash flow of USD 138 million. This allowed IPC to pay down the credit facility put in place to fund the purchase of 25.5 million IPC common shares under the share purchase offer in the second quarter of 2017. By the end 2017, IPC was in a net cash position of USD 6 million, excluding the CAD 40 million (USD 32.6 million) deposit for the Suffield acquisition in Canada (net debt of USD 26 million including the deposit).

In September 2017, IPC announced the transformational acquisition of the Suffield and Alderson conventional oil and gas assets in southern Alberta, Canada. All regulatory approvals were received in December 2017 and the transaction was successfully completed on January 5, 2018. These assets provide IPC with further low-decline production and upside development potential, in a stable jurisdiction. IPC also acquired an experienced operating team for these assets, with the skills and knowledge of the North American oil and gas market to review future potential growth opportunities.

IPC also continued to add value to its resource base in France, Malaysia and the Netherlands. IPC recently acquired a 3D seismic survey in the Villeperdue field in France which was completed in October 2017, on schedule and on budget. The two infill wells on the Bertam field in Malaysia were drilled and completed successfully, with production coming on-stream in January and February 2018. Both wells encountered good reservoir quality with production rates in line with expectations.

As at end December 2017, IPC’s proved and probable (2P) reserves more than quadrupled to 129.1 MMboe, including the Suffield acquisition in Canada. This includes a reserves replacement ratio of 76 percent (3) for the non-Canadian assets and follows the maturation of contingent resources from the infill drilling program in Malaysia and upgrades in France and the Netherlands.

In addition, IPC has more than tripled its best estimate contingent resources as at end December 2017 to 63.4 MMboe (unrisked), including the Suffield acquisition in Canada. We are confident that we have a solid resource base in place to provide the feedstock to add to reserves in the future.

Based on third party reserves reports, the net present value (NPV) (4) of IPC’s 2P reserves as at December 31, 2017 (including the Suffield acquisition in Canada) was USD 1,151 million. Net debt following the completion of the Canadian acquisition on January 5, 2018 was USD 355 million. (5) IPC’s net asset value (NAV) (6) following completion of the Canadian acquisition was USD 796 million, representing an increase of 47 percent from December 31, 2016. Following the share purchase offer completed in 2017, IPC has increased its NAV per share (7) from USD 4.8 to USD 9.1, representing an 89 percent increase.

Notes:
(1) IPC’s financial statements and MD&A for the three months and year ended December 31, 2017 are available on IPC’s website at www.international-petroleum.com and under IPC’s profile on SEDAR at www.sedar.com.
(2) See “Disclosure of Oil and Gas Information” below. Further information with respect to IPC’s 2P reserves, contingent resources and estimates of future net revenue, including assumptions relating to the calculation of NPV, are further described in the material change report (MCR) filed on the date of this press release by IPC and available under IPC’s profile on www.sedar.com and on IPC’s website at www.international-petroleum.com.
(3) Reserves replacement ratio is based on 2P reserves of 29.4 MMboe as at December 31, 2016, production during 2017 of 3.7 MMboe, additions to 2P reserves during 2017 of 2.8 MMboe and 2P reserves of 28.5 MMboe as at December 31, 2017. Such figures do not include the reserves attributable to the Suffield acquisition in Canada which completed on January 5, 2018.
(4) NPV is after tax, discounted at 8% and based upon the forecast prices and other assumptions further described in the MCR.
(5) Net debt as at January 5, 2018 is calculated as USD 26 million of net debt at December 31, 2017 plus USD 329 million (being the aggregate drawdown under the credit facilities in connection with the completion of the Suffield acquisition on January 5, 2018).
(6) NAV is calculated as NPV less net debt.
(7) NAV per share is based on the number of IPC common shares outstanding prior to and following the completion of the share purchase offer, being respectively 113,462,148 and 87,921,846.

Our 2018 capital expenditure budget is USD 32 million, primarily targeting production growth in Canada and Malaysia. We have allocated approximately USD 11 million to oil drilling in Suffield and approximately USD 14 million as carry-over costs related to the 2017-2018 infill drilling campaign in Malaysia, with the remainder on continued project, maintenance and optimization activities in France and the Netherlands. These expenditures in 2018 are expected to provide a strong base for further development and growth activities in 2019 and beyond.

Financial and Operational Highlights
· Total average net production of 9,952 boepd for the fourth quarter of 2017 and 10,307 boepd for the full year 2017.
· 2018 production guidance of 30,000 to 34,000 boepd.
· Operating costs per boe 14 percent below guidance at USD 16.1 for the full year 2017.
· 2018 operating cost guidance at USD 12.6 per boe.
· More than quadrupled 2P reserves to 129.1 MMboe and more than tripled best estimate contingent resources (unrisked) to 63.4 MMboe as at December 31, 2017, taking into account the Suffield acquisition in Canada.
· 2018 capital expenditure budget of USD 32 million.
· Completed the purchase of the Suffield conventional oil and natural gas assets in southern Alberta, Canada on January 5, 2018.
· Completed 3D seismic acquisition in the Villeperdue field (France) and the drilling of two infill wells in the Bertam field (Malaysia)
· Application made for permanent flagging status for the Bertam FPSO (Malaysia), awaiting final regulatory approval
· No material health, safety and environment incidents during 2017 and year to date in 2018.