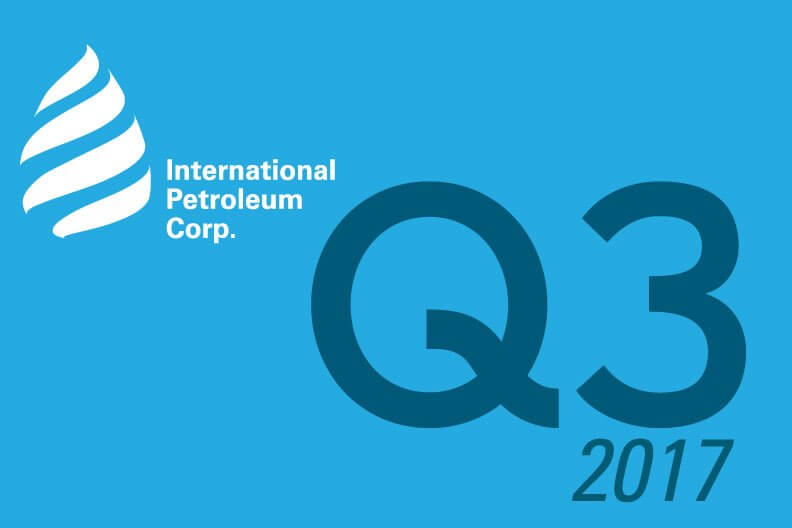 Mike Nicholson, IPC’s Chief Executive Officer, commented,
“We were very pleased to announce during the third quarter the transformational acquisition of the Suffield conventional oil and gas assets in Southern Alberta, Canada from Cenovus, due to complete by the end of this year. With the Suffield acquisition, we are increasing our reserves base fourfold from the beginning of 2018, with a three times increase in our production that delivers strong cash flow generation. The transaction is expected to be fully funded through debt financing, with no dilution to our shareholders, and we believe our timing was optimal given where we sit in the industry cycle.

Our French, Dutch and Malaysian assets have continued to perform strongly, with production 7% above mid-point guidance for the quarter and operating costs below guidance, leading to a further reduction in our full year operating cost guidance to USD 16.20 per barrel and a revised production guidance range for the year to 10,000 to 10,500 barrels of oil equivalent per day (boepd). We are also continuing to progress our new projects during the quarter, with preparations continuing for the drilling of an additional two infills in Malaysia, at lower than estimated cost, and the completion of the seismic acquisition in France.

Suffield Acquisition
The previously announced agreement with Cenovus Energy Inc., to acquire all of Cenovus’ interests in the conventional oil and gas assets in the Suffield and Alderson areas of southern Alberta, Canada, for a cash consideration of CAD 500 million at closing and a CAD 12 million deferred payment at end June 2018, (subject to closing adjustments and to certain additional contingent consideration) is expected to close by the end of this year.

This transaction will bring to IPC high quality conventional oil and gas assets with low decline rates and average forecast production of approximately 24,000 boepd in 2017, and gross 2P reserves as at January 1, 2018 of approximately 100 million boe (MMboe). The operation is low cost with forecast 2017 production costs of less than CAD 10.00 per boe. In addition, IPC will benefit from a high calibre operating team transferring from Cenovus.

Due to low capital invested by Cenovus in these assets for many years, IPC believes there are opportunities for potential growth of both production and reserves. In addition, given the favourable fiscal regime in Canada, IPC believes there is significant leverage to upside commodity prices.

Financial resilience
IPC is highly free cash flow generative given the low cost nature of our assets. For the nine months ended September 30, 2017, operating cash flow generation is ahead of guidance at USD 101.2 million based upon a first nine months average Dated Brent oil price of close to USD 52 per barrel.

Our net debt level was USD 47.2 million by the end of the third quarter, after taking into account the deposit of CAD 40 million paid as part of the Suffield acquisition transaction and the share purchase offer completed in the second quarter. This net debt level demonstrates the robust free cash flow generation from IPC at relatively low oil prices.

Maximizing the value of our resource base
We have continued to move forward with our plans to develop the contingent resource base of 17.5 MMboe announced in the second quarter of this year.

The drilling of two additional infill wells on the Bertam field in Malaysia was approved during the second quarter. Good progress has been made during the third quarter with partner approval having been secured and a rig contract executed. Drilling is expected to commence during the fourth quarter. These infill wells are expected to generate significant returns for shareholders given an essentially fixed operating cost base on the Bertam field, leading to breakeven prices of less than USD 20 per barrel.  From a production perspective, contribution from these infill wells is expected to enable IPC to more than offset the natural decline from our assets as we move into 2018.

We have now completed our first ever large-scale 3D seismic acquisition on one of our largest producing fields in the Paris Basin, the Villeperdue field targeting the low risk development of 4.1 MMboe of contingent resources. The seismic will now be processed and interpreted to better define the structure in the western flank of the field as well as our biggest prospect, Villeperdue Deep.

The actions we have taken since IPC was created have positioned us to convert up to one third of our contingent resource base into reserves and value, and study work continues with the aim of maturing additional opportunities in both France and Malaysia.”

Financial and Operational Highlights
·  Total average production of 9,200 boepd net for the third quarter of 2017 and 10,400 boepd for the first nine months of 2017, 7 percent and 4 percent ahead of mid-point guidance respectively.
·  Revised production guidance of 10,000 to 10,500 boepd from 9,000 to 11,000 boepd.
·  Operating costs per boe below guidance at USD 18.71 for the third quarter of 2017 (February 2017 Capital Markets Day (CMD) – USD 22.00) and USD 14.92 for the first nine months of 2017 (CMD – USD 18.75). The third quarter result included the impact of higher one off costs and lower production as a result of the planned Bertam shutdown.
·  Operating cost guidance for the full year is reduced to USD 16.20 per boe from Q2 guidance of USD 17.20 per boe.
·  Best estimate contingent resources assessed by IPC at 17.5 million boe (MMboe) as at June 30, 2017.
·  Capital expenditure guidance for 2017 reduced to USD 33 million (Q2 guidance USD 38 million).
·  3D seismic acquisition in the Villeperdue field (France – Paris Basin) was completed in October 2017.
·  Partner approval and rig contract secured for two infill wells in Malaysia. Drilling expected to commence during the fourth quarter.
·  No material health, safety and environment incidents year to date in 2017.