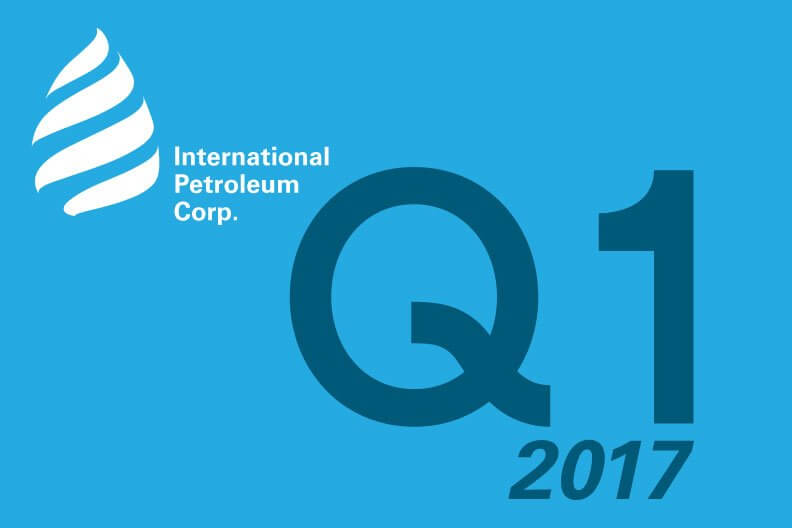 As previously announced, the spin-off by Lundin Petroleum AB of its non-Norwegian producing assets into IPC was completed and on April 24, 2017, all of the common shares of IPC were distributed to the shareholders of Lundin Petroleum.  The common shares of IPC commenced trading that day on the Toronto Stock Exchange and Nasdaq First North. The Corporation intends to seek the listing of its common shares on the Nasdaq Stockholm early in the second half of 2017, subject to fulfilling the requirements of Nasdaq Stockholm.

“I am pleased with IPC’s strong first quarter performance, with production of 11,500 boepd coming in ahead of our mid-point guidance. This was driven by continued high uptime performance on the Bertam FPSO and good performance in France and the Netherlands. I firmly believe we can add further value to our assets in France and Malaysia by actively pursuing organic growth opportunities in France and infill drilling in Malaysia. We expect to be able to provide more information on progressing these opportunities in our second quarter results. In addition, we are busy evaluating a number of potential acquisition opportunities and we remain encouraged by the quality of the assets we are seeing on the market.

Our shareholders who received their IPC common shares in the spin-off have been well rewarded under Lundin Petroleum.  While the offer was announced to purchase a portion of common shares of IPC and Statoil have agreed to tender their shares into that offer, I hope you will join me, my experienced management team and our Board as we seek to use this excellent platform to grow a new internationally focused upstream exploration and production company”

· Quarterly production averaged 11,511 barrels of oil equivalent per day (boepd), above the mid-point guidance for the same period.  IPC production guidance for 2017 remains unchanged at 9,000 boepd to 11,000 boepd for the full year.
· Facilities uptime on the Bertam FPSO in Malaysia was in excess of 99%, well above industry average and all assets have performed well.
· Total revenue was USD 51.9 million in Q1 2017 with an average realised crude oil sales price of USD 54.87/bbl which is a premium to the average Brent price over the quarter.
· Production costs (excluding inventory movements and FPSO costs) amounted to USD 12.8 million, an average of USD 12.33/boe for the quarter, below IPC production cost guidance for Q1 2017.
· IPC generated strong cash flow from operations in Q1 2017 at USD 39.2 million, well above the USD 28.2 million from Q1 2016.
· Subsequent to the end of the first quarter, IPC entered into a 2.25 year, USD 100 million reserve-based lending facility, which will be used to finance the share purchase offer.

This information is information that International Petroleum Corporation is required to make public pursuant to the EU Market Abuse Regulation and the Securities Markets Act. The information was submitted for publication, through the contact persons set out above, at 08.30 CEST on 9 May 2017. The Company’s interim consolidated carve-out financial statements, notes to the financial statements and management’s discussion and analysis have been filed on SEDAR (www.sedar.com) and are also available on the Company’s website (www.international-petroleum.com).