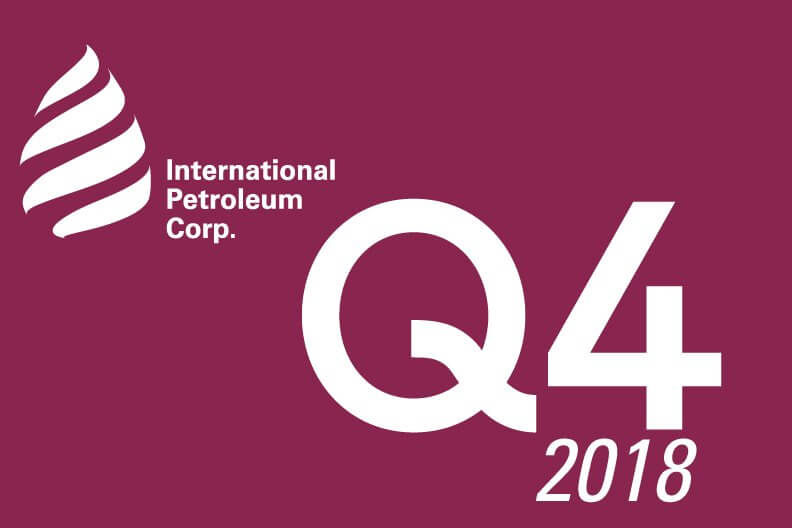 International Petroleum Corporation (IPC or the Corporation) (TSX, Nasdaq Stockholm: IPCO) today released its financial and operating results and related management’s discussion and analysis (MD&A) for the year ended December 31, 2018.(1) IPC is also pleased to announce its 2019 capital expenditure budget range of between USD 146 and 166 million and its 2019 production guidance of between 46,000 and 50,000 barrels of oil equivalent (boe) per day (boepd). 2018 year-end 2P reserves and best estimate contingent resources (unrisked) are respectively 288 million boe (MMboe) and 849 MMboe.(2)

“Our focus since launching IPC in April 2017 remains unchanged: seeking to deliver operational excellence, demonstrating financial resilience, maximizing the value of our resource base and targeting growth through acquisition. With our fourth quarter of 2018 performance delivered ahead of guidance and another transformational acquisition completed in December 2018, we continue to make excellent progress on all fronts in delivering on that strategy.

2018 Year-End Results(3)
During the fourth quarter of 2018, our assets delivered average daily net production of 34,600 boepd, above the high end of our revised guidance for the quarter. The fourth quarter performance concludes an excellent year of delivery from all assets with full year 2018 average daily net production of 34,400 boepd, coming in above the high end of our full year guidance. Our operating costs per boe for the fourth quarter was USD 13.1, resulting in a full year 2018 average operating costs per boe of USD 12.4, lower than our 2018 CMD guidance of USD 12.6.(5)

IPC has continued to deliver a robust financial performance during the fourth quarter of 2018 generating operating cash flow of USD 58 million.(5) This allowed IPC to fund our expenditure program and reduce net debt from USD 213 million at the end of the third quarter to USD 166 million by the end of the fourth quarter.(5) Full year operating cash flow was in excess of USD 279 million and net debt reduction was close to USD 190 million since completion of the Suffield acquisition in early January 2018.(5) Including the additional USD 111 million of net debt acquired as part of the acquisition of BlackPearl, IPC’s total year end net debt was USD 277 million.(5)

In Malaysia, following positive results from the 2016 and 2018 infill drilling programs and continued good reservoir performance, we were encouraged to mature a third phase of infill drilling on the Bertam field for execution in 2019. Up to three drilling locations have been identified and work continues to mature additional locations. In addition, we plan to drill the Keruing prospect during the first half of 2019.

In Canada, during the fourth quarter of 2018, oil drilling commenced for the first time since 2014 in the Suffield area. Five horizontal wells had been drilled by the end of 2018, with production commencing in January 2019 at initial rates in line with expectations. On the gas side, given the exceptional results from the 2018 gas optimization program, further work is expected to continue through 2019.

In December 2018, IPC completed the transformational acquisition of BlackPearl in an all-share transaction. The transaction combines the highly free cash flow generative short cycle reserve base of IPC with the strategic long life reserve and contingent resource base of BlackPearl, creating a company with the combined financial strength to accelerate value creation from the enlarged portfolio. IPC’s reserves life index is more than 16 years following the acquisition. In addition, a high calibre team of industry professionals with a long track record of value creation joined IPC to integrate with our existing team in Canada.

As at end December 2018, IPC’s 2P reserves more than doubled to 288 MMboe compared to December 31, 2017.(2) This includes a reserves replacement ratio in 2018 of 103 percent for IPC’s assets other than those acquired in the BlackPearl transaction.(4) This results from the maturation of contingent resources from the infill drilling program in Malaysia as well as better reservoir performance and certain upgrades in France and Canada, particularly on back of the gas optimization program in Canada.

In addition, IPC has increased its best estimate contingent resources (unrisked) by over thirteen times as at end December 2018 to 849 MMboe, compared to end December 2017.(2) We are confident that we have a solid resource base in place to provide the feedstock to add to reserves in the future.

Our 2019 capital expenditure budget range is between USD 146 and 166 million, targeting production growth in all of our countries of operations. The budget includes the proposed 2019 infill drilling campaign, the Keruing exploration well and other optimization work in Malaysia, and the Vert La Gravelle development project and other project maturation activities in France. We also include continued Suffield area oil drilling and gas optimization, Onion Lake Thermal facilities and well work, and Blackrod project activities in Canada. Given our high working interests and operatorship position on our assets, IPC retains a high degree of discretion on the 2019 activity scope based on market conditions.

Notes:
(1) IPC’s financial statements and MD&A for the year ended December 31, 2018 are available on IPC’s website at www.international-petroleum.com and under IPC’s profile on SEDAR at www.sedar.com.
(2) See “Disclosure of Oil and Gas Information” below. Further information with respect to IPC’s reserves, contingent resources and estimates of future net revenue, including assumptions relating to the calculation of NPV, are further described in the material change report (MCR) filed on the date of this press release by IPC and available under IPC’s profile on www.sedar.com and on IPC’s website at www.international-petroleum.com.
(3) The acquisition of BlackPearl was completed on December 14, 2018. For accounting purposes, the acquisition was reflected on the balance sheet as at December 31, 2018. Given that the financial and operational results from the acquired assets from the date of acquisition to December 31, 2018 were not material to the Corporation, the contribution of these assets is not reported in 2018.
(4) Reserves replacement ratio is based on 2P reserves of 129.1 MMboe as at December 31, 2017 (including 2P reserves attributable to the acquisition of the Suffield area assets which completed on January 5, 2018), production during 2018 of 12.4 MMboe, additions to 2P reserves during 2018 of 12.7 MMboe and 2P reserves of 128 MMboe as at December 31, 2018 (excluding 2P reserves attributable to the acquisition of BlackPearl).
(5) Non-IFRS measure, see “Non-IFRS Measures” below and in the MD&A.
(6) NPV is after tax, discounted at 8% and based upon the forecast prices and other assumptions further described in the MCR.
(7) NAV is calculated as NPV less net debt as at December 31, 2018.
(8) NAV per share is based on the number of IPC common shares outstanding as at December 31, 2018 being 163,720,065.