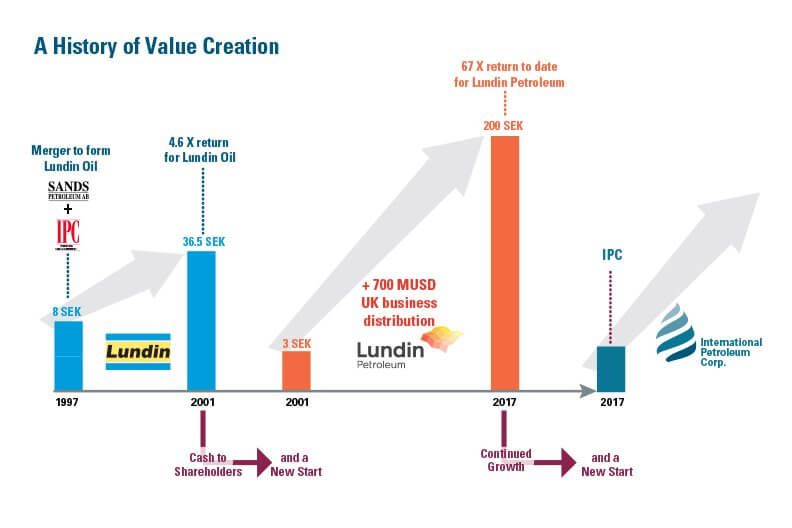 The Lundin family have a long track record of creating value

The Lundin family have a long track record of creating value in Petroleum. IPC was one of the early start-up companies created by Adolf Lundin in the 1980’s and had significant success in building a material resource position in Malaysia in the 1990’s. In 1997 IPC merged with Sands Petroleum and formed Lundin Oil. In 2001 Talisman Energy, the Canadian independent made of offer to acquire the shares in Lundin Oil for around USD 400 million.

Following that sale the Lundin family and management decided to start up Lundin Petroleum, led by Ashley Heppenstall (CEO) and Ian Lundin (Chairman of the Board). The team raised USD 50 million in cash equity, made a number of resource acquisitions during the 2003 and 2004 period and used this as a platform to grow one of the largest listed independent E&P companies in Europe over the next decade. The spin-off of the UK business in 2010 returned significant value to shareholders, and the company grew in value by an astonishing >60x by the end of 2016.

By relaunching IPC in 2017, in one of the most favourable market environments to make acquisitions we have seen in the past 10 years, the company is well positioned to capitalise on the situation and create value from the opportunities that are presenting themselves.