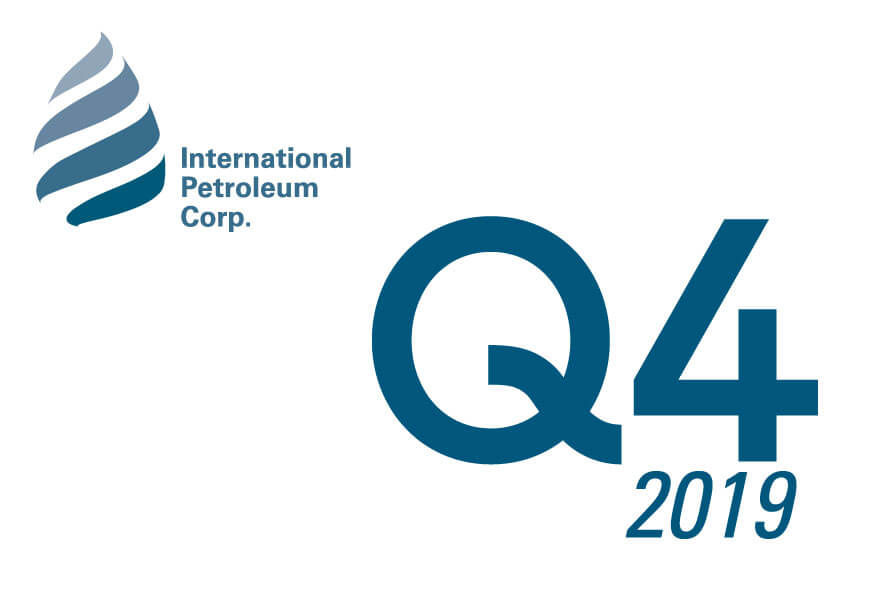 Business Development Highlights
• In January 2020, IPC announced the proposed light oil acquisition of 2P reserves of 14.0 MMboe and 6.2 MMboe of contingent resources (best estimate, unrisked) as at December 31, 2019(2)(3), for total equity and debt consideration of USD 59 million. The acquisition of Granite Oil Corp. (Granite) will be IPC’s third acquisition in less than three years. Completion of the Granite transaction remains subject to satisfaction of certain conditions and is expected to occur in early March 2020.

“Our focus since launching IPC in April 2017 remains unchanged: seeking to deliver operational excellence, demonstrating financial resilience, maximizing the value of our resource base and targeting growth through acquisition. With financial results delivered at the high end of guidance and the most active quarter of investment across all areas of operations, as well as the announcement of another corporate acquisition and the ongoing execution of IPC’s second share repurchase program, we continue to make excellent progress on all fronts in delivering on that strategy.

IPC delivered a very strong full year 2019 financial performance generating an operating cash flow of USD 308 million, at the upper end of Q3 2019 guidance and a full year net result of USD 104 million.(4) The Q4 2019 operating cash flow amounted to USD 79 million.(4) Free cash flow generation for the full year 2019 was USD 89 million (excluding the share repurchase program and before payment of the spin-off residual working capital liability to Lundin Petroleum).(4) This robust financial performance allowed IPC to fund its expenditure and share repurchase programs, whilst reducing net debt levels from USD 277 million at the end of 2018 to USD 231.5 million by the end of 2019.(4)

In Canada, during Q4 2019, the full year 2019 average net production levels at the Suffield area were two percent higher than 2018 levels demonstrating the positive impact of our ongoing oil drilling and gas optimization programs more than offsetting natural declines. Our N2N enhanced oil recovery (EOR) project and drilling program was completed as scheduled in 2019. In addition, preparatory work continued during Q4 2019 which is expected to allow our single rig drilling program to continue through 2020. At Onion Lake Thermal in Canada, facility optimization work completed earlier in 2019 that allowed for steam injection to commence at F-Pad during Q3 2019 and production ramp up through Q4 2019. Following completion of the ramp up of production, average production rates during December 2019 were just below 12,000 boepd in line with expectation. As we look forward, we plan to add another drilling pad during 2020 to increase production toward facility capacity levels of 14,000 boepd by year-end 2020.

In Malaysia, a world class uptime performance on the Bertam FPSO in excess of 99 percent continued during Q4 2019. Fourth quarter 2019 production on the Bertam field was 5,400 bopd, in line with our Q3 2019 guidance and five per cent higher than Q3 2019 production as we started to benefit from production from the three well infill drilling program. Following encouraging results from the 2019 infill drilling program, two additional infill drilling locations have been identified and booked as contingent resources in the A-15/A-20 Bertam field area. Further technical work is planned on these locations during 2020, for potential drilling in 2021.

In addition, IPC has increased its best estimate contingent resources (unrisked) as at end December 2019 to 1,089 MMboe, compared to 849 MMboe as at end December 2018.(2)(3) We are confident that we have a solid resource base in place to provide the feedstock to add to reserves in the future.

2020 Budget and Production Guidance
We are pleased to announce our 2020 production guidance is 46,000 to 50,000 boepd.(2) We forecast operating costs for 2020 to be USD 13.7 per boe.(2)(4) We also forecast significant free cash flow generation based on our 2P reserves base of an aggregate of more than USD 500 million to USD 1.3 billion over the coming five years, without taking into account development of our contingent resources or any further potential acquisitions.(2)(3)(4)(9)

Our 2020 capital expenditure budget is USD 149 million(2), targeting production growth in all of our countries of operations. The budget includes continued oil drilling and gas optimization activities in the Suffield area, Onion Lake Thermal facilities work and Blackrod project activities in Canada, as well as carry-over drilling expenditures on the Bertam field in Malaysia. In France, we continue with finalising Phase I of the Vert La Gravelle redevelopment project and we plan to commence the Villeperdue West development project. In addition, the budget includes approximately USD 10 million to invest in growing the assets to be acquired in the Granite transaction in Canada.(2)